TN 70: 40 years to build tight and ventilate right: From infiltration to smart ventilation 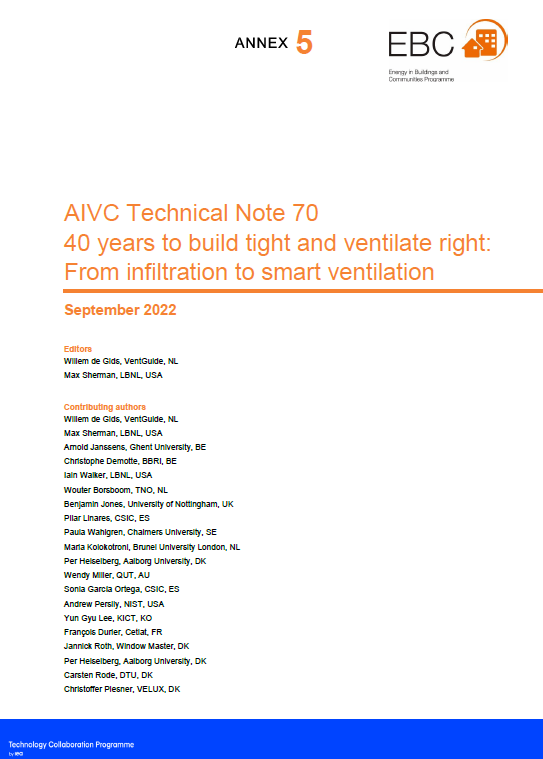 As the AIVC was created in 1979, the 40th anniversary of the AIVC was celebrated in October 2019 at the 40th AIVC conference in Ghent. In the context of this celebration, it was decided to publish 2 overview publications:

The AIVC was created in 1979 and started having annual conferences in 1980. The 2019 Conference was its 40th conference and the conference theme focused on its anniversary. This Technical Note is a compendium of the contributions that the AIVC has made in its first 40 years and reflects field’s evolution over time. Much of the information generated by the AIVC is of direct use today and some of the older material is good source material for future research.

The AIVC is an information dissemination project created by the International Energy Agency (IEA) as a result of a need to understand the energy impacts from air leakage in buildings for the energy crisis of the 1970s. When the Center was first created it was called the Air Infiltration Center because the focus was on energy loss due to infiltration. It was generally thought that most buildings leaked way too much air and that reducing that infiltration would reduce dependence of fossil fuels.

The mechanism the IEA uses to create projects is through implementing agreements of member nations. The AIC was the 5th project (or “annex”) created by the implementing agreement on buildings and community systems, which has been renamed Energy in Buildings and Communities (EBC) at https://www.iea-ebc.org/. There have been 70 projects completed from EBC and 17 that are on-going currently. Of those, Annex V is the only information dissemination center and the only one that is active for more than a few years.

Because infiltration research was not a field of its own in the 70s, the AIC became the de-facto coordinating body for infiltration-related research around the world. It was sometimes difficult to understand each other, hence we started a series of TN named AIRGLOSS in which terms and definitions were described. When investigating a new area, the first thing one must do is be able to measure it. A significant effort was put into measurement techniques both for air change rate and for air tightness. The research community is much broader now, but these are still active areas of research. Chapter 3 discusses air tightness and Chapter 4 discusses air flow measurement techniques.

Infiltration and air tightness are of course related, but quantitatively connecting air leakage and air flow, requires modeling and such models did not really exist. So along with a focus on measurement techniques, the AIC worked on infiltration modeling as discussed in Chapter 5. The first models were simple, physical models, but as computing power and the state of knowledge grew, so did the models.

After only a few years, it became clear that looking at infiltration in isolation was a sub-optimal approach. As buildings were getting tighter, there was a concern of insufficient air exchange. An optimal energy solution would then need to include both infiltration and designed ventilation. Accordingly, annex V’s mandate was broadened to include ventilation systems and in the mid-80s the name was changed to the Air Infiltration and Ventilation Center as it remains.

In 1985 the AIVC began publishing technical reports (e.g. TN 17) that specifically focused on optimal ventilation strategies. Many AIVC (and conference publications) have worked this problem in the last 35 years. Chapters 14 and 15 review many of the approaches used today. One of the more recent trends is to make our ventilation systems smarter and Chapter 13 looks at some aspects of that.

It was also realized during the 1980s that occupant behavior had a bit impact with respect to ventilation overall. EBC Annex VIII focused on this and resulted in 1988 in AIVC TN23 on the topic. Early research focused on issues such as window opening, but later work looked at how mechanical systems are perceived and ran. Chapter 10 looks at occupant impacts from today’s perspective.

Ventilation for acceptable indoor air quality generally uses energy to condition the outdoor air, but there are times when ventilation can save energy, if it displaces the need for mechanical cooling. Providing ventilative cooling can be through both mechanical and natural means and can positively impact comfort. Chapter 8 discusses these issues.

As the AIVC was going to work on optimal ventilation strategies, it was important to know what the standards for acceptable ventilation were and this became another focus of the center’s work. The center has published many documents related to standards such at TN26 in 1989  that summarized EBC Annex IX. Ventilation standards have grown much more sophisticated since those times and are addressed in Chapter 9.

One thing common to most ventilation standards over that period is that they assume that outdoor air is clean, or at least substantially better than indoor air. In such a case one can use it to dilute indoor-generated contaminants without worry. We know that in many cases this assumption is wrong, but it is not always clear what to do. Chapter 12 looks at the issue of outdoor air more broadly.

Outdoor air contains moisture, but water vapor is a rather unique kind of contaminant: it has both an indoor and outdoor source and we neither want too much of it nor too little. Control of moisture has been a priority for the AIVC since it had a workshop in New Zealand (TN20) in 1987. Chapter 7 provides an overview the issue today.

Another unique kind of constituent is carbon dioxide. CO2 is a product of combustion including human metabolism and therefore is unavoidable in indoor spaces. At high enough concentrations CO2 can become deadly, but it is not a contaminant of concern in typical buildings. It is, however, a good indicator that can be used in ventilation systems. Use and misuse of CO2 is a quite topical issue today. Chapter 11 discusses the role of CO2 in buildings.

Since the turn of the century, it has been clear that the purpose of ventilation is acceptable indoor air quality and one cannot determine acceptable indoor air quality without looking at health. A growing part of the more recent efforts of the AIVC have been focused on understanding this health linkage and optimizing systems accordingly. Chapters 6 and 13 address what the AIVC has been doing in this area and form a basis for future activities.